Online buyer journeys have become a lot more complex over the years.

Brad is a mid-level IT leader who needs to learn about technology solutions after his VP told him about their company’s IT goals for the year. Brad isn’t quite sure where to start, so like many of us, he heads to Google. He clicks on a few links on the first page, reads a couple articles and watches a video.

Later that week, he does some more research and clicks on an ad. It takes him to a targeted landing page that includes value propositions and a form to receive a demo of a specific product.

Unfortunately, Brad isn’t ready to fill out that form yet. (That’s OK, Brad, we’re here for you along the way. But remember all of those cookie notices you clicked “Accept” on? So do those companies.)

A few weeks later, Brad’s boss asks him for an update, which sparks his desire to get serious. Brad dives back into research, which is now influenced by his initial online activity. He starts a comparison chart between three of his top prospects and sets up demos for each company’s service.

Brad did all of this work, but still hasn’t made a decision. Truthfully, this is how a lot of buyer’s journeys play out today, especially for B2B purchases that have high stakes and multiple decision-makers.

This is why it’s so important to adapt marketing materials to different formats and channels. When companies can meet people where they already are, and with an enticing message, they are positioned more favorably to make it to the next round in a prospect’s research.

When we look closer at Brad’s buyer’s journey, we see multiple touch points that ultimately led to scheduling a demo:

These integrated online experiences influence prospects as they consider a purchase.

The internet is intensely competitive, and companies that focus all of their efforts on a single channel, a single medium, a single tactic, aren’t getting the best ROI compared to an integrated strategy. 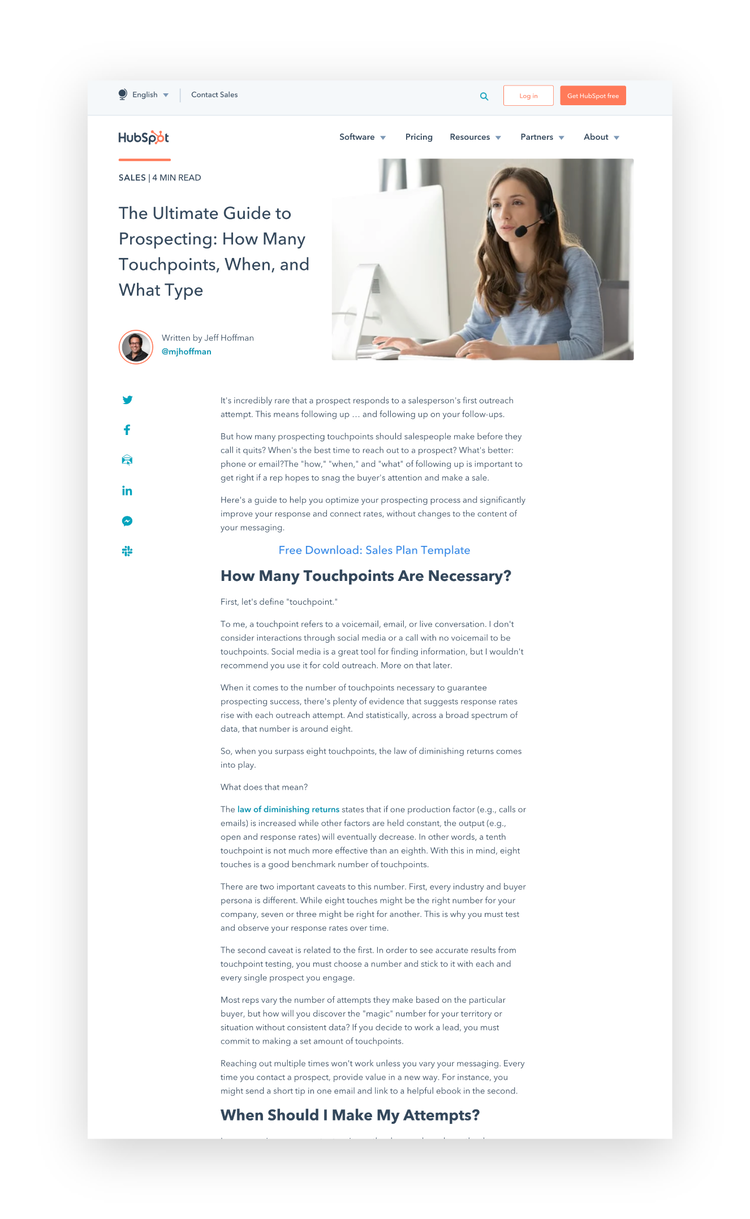 Oftentimes when Br8kthru talks with in-house marketing teams, they express difficulty with connecting their online ecosystem and evaluating which channels lead to conversions.

This is where tracking prospects throughout their online activity is helpful. Research shows that prospects engage with companies seven times before they make a decision. (It’s worth noting that data is slim in this area, but 7-8 touch points before a conversion is a good benchmark.)

What does this mean for your marketing strategy? Your company’s presence can’t exist solely in one format. You need to adapt your message to meet prospects where they’re at. To get started, it’s helpful to do a deep dive into the different methods available for amplifying marketing activity.

For example, one blog post can be turned into:

By transforming your content, you are able to connect with prospects through their preferred method. Nimble marketing teams can squeeze the most value from their effort by focusing on amplifying marketing activities.

At Br8kthru, we’re looking to give our Clients the most value for their budgets. Sometimes this starts with repurposing existing content and marketing efforts instead of creating new material. By focusing on an integrated online marketing strategy, we help companies guide prospects through complex buying decisions.

Connect with Br8kthru for a brainstorm session to look at your marketing strategy through fresh eyes.